The Republic of The Gambia commonly referred to as the smiling coast of Africa, is situated in the western region of Africa. It has a land area of 11,295 sq. km (4361 sq. miles) with an estimated population of a little over 2,000,000. The agriculturally fertile country, dominated by farming, fishing, and tourism has its capital in Banjul.

The first written accounts of the West Africa region came from records of Arab traders in the 9th and 10th centuries AD, who established the trans – Saharan trade route for slaves, gold and ivory. The Portuguese took over this trade using maritime routes in the 15th century. At that time, The Gambia was part of the Mali Empire. Between 1651 and 1661 part of Gambia was (indirectly) a colony of Polish-Lithuanian Commonwealth. The Colanders settled on the kunta Kinteh Island (James Island), which they called St. Andrews Island and was used as a trade base from 1651 until its captivity by the British in 1661.

The 1783 Treaty of Paris gave Great Britain possession of The Gambia, but the French retained a tiny enclave at Albreda on the north bank of the river, which was finally ceded to the United Kingdom in 1857.

It is believed that as many as three million slaves may have been taken from the West Africa region during the three centuries that the transatlantic slave trade operated. Slaves were initially sent to Europe to work as servants until the market for more labor was expanded in the West Indies and North America in the 18th century. In 1807, slave trading was abolished throughout the British Empire and the British tried unsuccessfully to end the slave trade in The Gambia. They established the military post of Bathurst (now the capital city, Banjul) in 1861. In 1888, The Gambia became a separate colonial entity. A year later an agreement with France established the present boundaries and The Gambia became a British Crown Colony, divided for administrative purposes into the colony (city of Banjul and the surrounding area) and the protectorate (remainder of the territory). During World War II, Gambian troops fought with the Allies in Burma. Banjul served as an air hub for the U.S. Army Air Corps and a port of call for Allied naval convoys. U.S. President Franklin D. Roosevelt stopped overnight in Banjul en route to and from the Casablanca Conference in 1943, marking the first visit to the African Continent by an American president whilst in office.

On 22nd July, 1994, the Armed Forces Provisional Ruling Council (AFPRC) seized power in a peaceful military coup d’ètat. After a strong showing at the polls in 1996, retired colonel Yahya AJJ Jammeh was sworn into office as the second President of the Republic of The Gambia on 6th November, 1996. He has steered the ship of the state since, winning three consecutive elections; in 2001, 2006 and 2011. To date, The Gambia remains a stable and peaceful democratic state.

Most Gambian hotels are geared primarily for packaged tours. Hotels & Accommodations are often booked in the winter tourist season (October to May), and confirmation of advance booking should be sought. Most of the hotels are self-contained complexes set in spacious gardens and will generally cater for most tourist needs ranging from luxury to standard depending on the hotel star rating. The number of hotels has increased greatly in recent years and is expected to continue 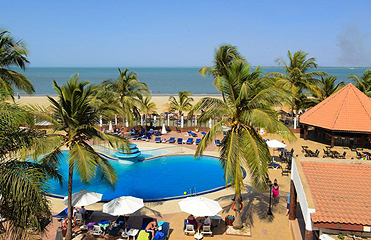